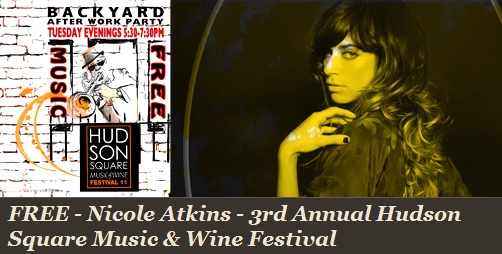 Every Tuesday from June 21st to August 16th, Trinity Real Estate, Great Performances and City Winery will host a free neighborhood celebration of music, food, and wine. With its downtown location just west of Soho, the Hudson Square Music & Wine Festival is a uniquely urban summer festival for everyone from families and visitors to the after-work crowd. The FREE series of concerts will be held in the backyard of City Winery and features an eclectic mix of musicians, food vendors, artists and full bar service.

All concerts for the Hudson Square Music and Wine Festival are held in the space behind City Winery at 155 Varick Street btw Vandam and Spring Street.

Subway: Take the 1 Train to Houston. A,C,E to Spring Street.

The accomplished singer/songwriter is performing for a rare indie-rockabilly show.