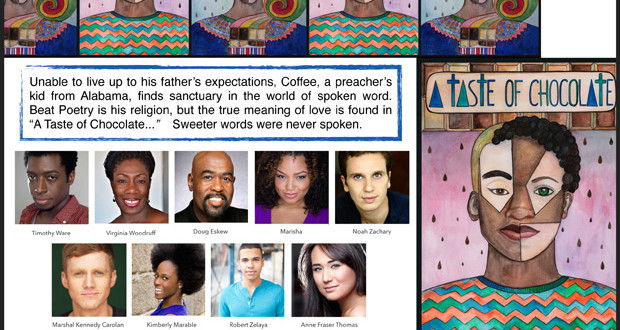 A Taste of Chocolate Reading

Join Amas Musical Theatre as they present free staged readings of the new musical A Taste of Chocolate.

A Taste of Chocolate features book, music and lyrics by Timothy Ware, with additional lyrics and arrangements by Alvin Hough.

About A Taste of Chocolate:

“Unable to live up to his father’s expectations, Coffee, a preacher’s kid from Alabama, finds sanctuary in the world of spoken word,” according to press notes. “Beat poetry is his religion, but the true meaning of love is found in A Taste of Chocolate. Sweeter words were never spoken.”

“Timothy Ware is a new theatrical voice at a powerful juncture, where spoken word confronts faith, family and the very meanings of identity,” said Donna Trinkoff, Amas artistic producer, in a statement. ”A Taste of Chocolate challenges an entire community to sample an alternative perspective.”