A Wake for Ochi’s Lounge 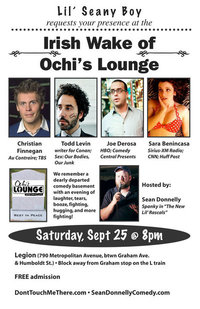 Come out to pay your respects to the dearly departed Ochi’s Lounge. Ochi’s Lounge was in the downstairs level of Comix Comedy Lounge and the home to many up and coming comedians.  To commemorate the life of this comedy gem, which was taken from us far too soon, “The Lil Seany Boy Show” will be hosting an Irish Wake featuring some of Ochi’s closest friends (and NYC’s best comedians).