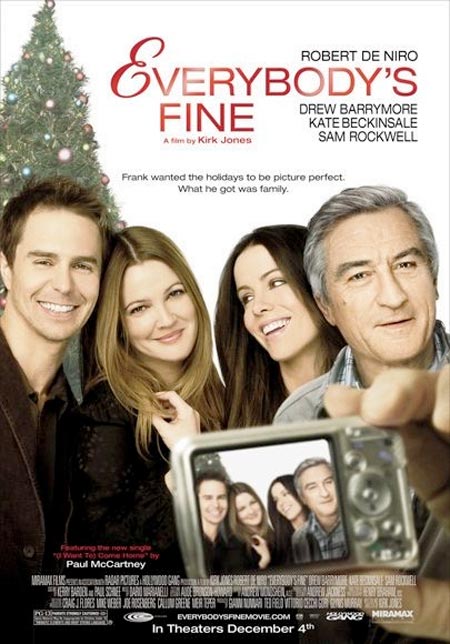 The New York Observer and Miramax invite you to an advance screening of Everybody’s Fine. Enter here for your chance to receive a complimentary pass for two.

EVERYBODY’S FINE,” a remake of Giuseppe Tornatore’s “Stanno Tutti Bene,” follows a widower (De Niro) who embarks on an impromptu road trip to reconnect with each of his grown children only to discover that their lives are far from picture perfect. Written and directed by Kirk Jones (“Waking Ned Devine”), Drew Barrymore, Kate Beckinsale and Sam Rockwell also star.

WRITTEN AND DIRECTED BY: Kirk Jones

Contest Rules: No purchase necessary. Void where prohibited. Subject to all laws. Open to U.S. residents 13 years of age or older at the time of entry. Sweepstakes begins at midnight EST on November 25th 2009 and ends at midnight EST on November 30th 2009. Limit: One (1) entry per person. Approximate Retail Value of Prize: $24.00. Odds of winning are based on the number of eligible entries received. Sweepstakes sponsor: The New York Observer, [LLC], 915 Broadway, 9th Floor New York, NY 10010.