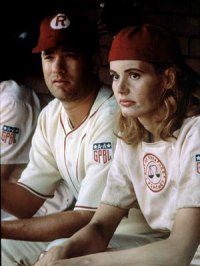 There’s no crying in baseball, but there’s also definitely no crying on Geena Davis’s birthday. She is very TALLented, right?? This week’s Big Terrific is a birthday party for Ms. Davis. Did you know that Geena is in MENSA and also tried out for the Olympic archery team? Of course you did. Literally everyone knows that. It is like the second thing they teach you in kindergarten. “There are 26 letters, don’t provoke bees, and Geena Davis is as smart as she is tall and good at shooting arrows.”

Come out to this week’s Big Terrific for lots of fun times and laughs. Gabe Liedman is still out in LA, but we will pour one out for him this week because he reeeeally loves A League of Their Own, especially the scene where Tom Hanks takes a super long piss.

Please come hang out! Also, does anyone know Lori Petty’s ICQ number? I really want to invite her to come celebrate her old friend Geena’s birthday.