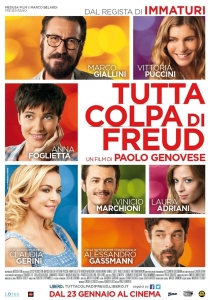 Join New Italian Cinema Events as they present the New York premiere screening of “Blame Freud” (“Tutta Colpa di Freud”) by Paolo Genovese, an Italian box office hit comedy, featuring a stellar cast including Marco Giallini in the role of a psychologist coping with three hopeless cases: a bookseller (Vittoria Puccini) who falls in love with a thief (Vinicio Marchioni), a lesbian (Anna Foglietta) who decides to become straight, and an eighteen-year-old girl (Laura Adriani) who loses her mind over a fifty-year-old man (Alessandro Gassman). One small detail: all three patients are his own beloved daughters (In Italian with English subtitles).

The screening will be followed by a Q&A with director Paolo Genovese.


The event is free and open to the public on a first come, first served basis.