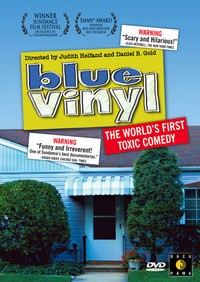 In conjunction with Petrochemical America and the Project Room exhibition, join Aperture and the Center for Health, Environment & Justice for a screening of Blue Vinyl, a 2002 documentary film directed by Daniel B. Gold and Judith Helfand. The film follows one woman’s quest for an environmentally sound cladding for her parents’ house in Merrick, Long Island. It also investigates the health effects of the production, use, and disposal of polyvinyl chloride.

Following the screening, stay for a conversation with Gena Wirth of SCAPE, environmental health historian David Rosner, who is featured in the film, and Mike Schade, Campaign Coordinator for the Center for Health, Environment & Justice.