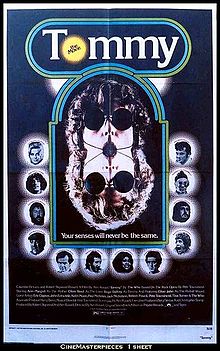 Director Ken Russell’s campy cult classic Tommy. The Who made history with this, the first-ever movie/rock opera, which tells the tale of Tommy (Roger Daltrey), a boy who loses the ability to hear, speak, and see after the tragic death of his father. Despite his losses, Tommy becomes the pinball wizard and a messiah, only to have his followers betray him. Also starring Tina Turner as a way out there Acid Queen, Ann Margret as Tommy’s mum, Elton John as the Pinball Magician, and Eric Clapton as… a decidedly dodgy Preacher.