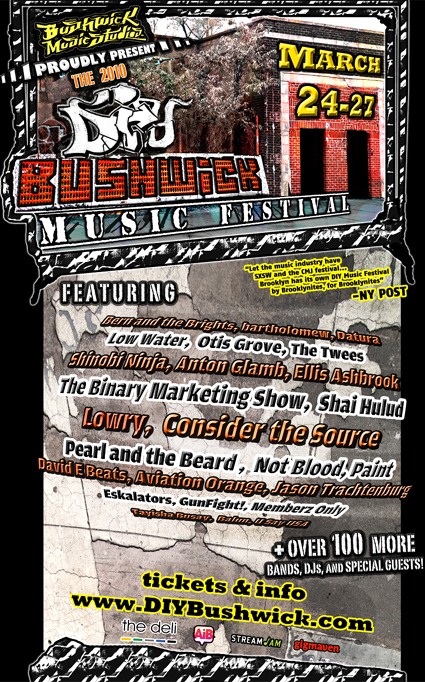 Sure, SXSW was probably tons of fun with it’s all night parties and shows everywhere all the time, but Brooklyn is gearing up for its own inebriated celebration of music: Bushwick Music Festival. In association with Arts In Bushwick, Deli Magazine and Bushwick Music Studios the DIY festival is a four day romp from March 24-27. It all came together when the Bushwick Music Studios crew decided to unify all the best loft and warehouse spaces, as well as the most talented musicians, DJs and performance artists in the area. Most of the shows are really cheap, and are going down all over Bushwick. Get the full schedule after the jump. The idea behind the whole thing is to showcase little-known, DIY bands, DJs and artists from the Bushwick area of Brooklyn. This quiet and rundown neighborhood has become a sort of artistic mecca over the past few years, attracting DIY musicians/artists, and the festival aims to galvanize the flourishing Bushwick scene into one cohesive artistic entity.

There is a seemingly continual supply of new bands in Brooklyn, and the festival will feature them with a bewildering amount of shows. So if you couldn’t make it to SXSW for some reason, and you live in NYC or the tri-state region, come out and celebrate the music and art of the rapidly growing Bushwick scene.

You can see a listing of all the shows here, as well as a map of the venues here.