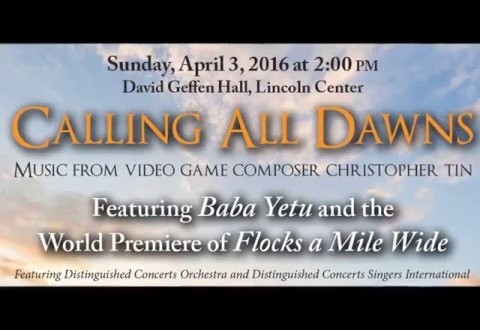 Calling all video game music lovers! We have partnered with Distinguished Concerts International New York to giveaway a pair of tickets to Calling All Dawns featuring music by video game composer Christopher Tin. There are many ways to enter:

Heralded by Time Magazine as a “rousing, anthemic theme song,” Calling All Dawns’ “Baba Yetu” made history as the first piece of music written for a video game ever to be nominated for—or win—a Grammy. Composed for the game Civilization IV, the song drew attention from technology sources like Wired.com, who called it “a standout piece of music … richly deserving of the award” and Higher Plain Music, who called the album “a masterpiece … pure and absolute musical hedonism. Calling All Dawns is a powerful journey of twelve songs in twelve different languages—including Swahili, Mandarin, Hebrew, Irish, and Farsi—all dealing with the themes of life, death and rebirth and carrying a message of unity. Lyrics are drawn from a variety of sources, both sacred and secular: Japanese haiku, Maori proverbs, the Torah, the Bhagavad Gita, and many more, with each song flowing seamlessly into the next. Songs of sorrow, mystery, and hardship reflect the complexity of mortality, while songs of joy, triumph and exultation bring us roaring back to life, beginning the cycle anew.