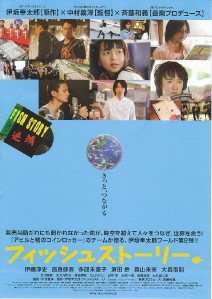 Nippon Cinema has 3 pairs of passes to give away for screenings of Yoshihiro Nakamura’s “Fish Story” at this year’s New York Asian Film Festival (June 19 – July 5).

To enter, send an email to nippon.cinema@gmail.com with your full name and your preferred screening – either Sat. June 27, 1:00pm at the IFC Center or Thurs. July 2, 6:15pm at Japan Society. All entries must be received by Wed. June 24th and 3 winners will be chosen at random.

“In 1975, the year before the Sex Pistols released their first album, a Japanese punk band called Gekirin recorded their single, “Fish Story” and then they broke up, never to record again. Thirty-seven years later, in 2012, their song saves the world. This is the tenth film from Yoshihiro Nakamura and we’re not saying any more about it.

Because it really happened. A punk single from 1975 traveled to the future and saved us all. Any more information than that would deprive you of the surprises and the fun of watching one of the year’s best films. It’s a movie that reminds us of something we all forget from time to time: your life has a purpose. Even if you never understand it, you’re here for a reason.”