Creative Cartooning: The Art and Animation of Pee-wee’s Playhouse 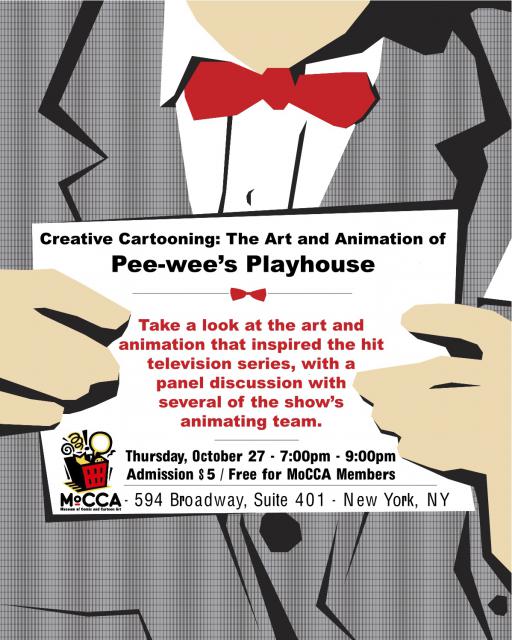 Join the Museum of Comic and Cartoon Art (MoCCA) and ECW Press in celebrating the animation and creativity of Pee-wee’s Playhouse, the Saturday morning children’s show that ran from 1986-1991 that garnered nearly ten million viewers each week. The show included cutting-edge stop-motion animation, as well as cartoons from Ub Iwerks, Dave Fleisher, Rudolf Isling, and others from the Golden Age of Animation. Punk artist Gary Panter lent his avant-garde sensibility to the overall artistic design of the show’s set and many of the puppets, both of which were like three-dimensional cartoons. On the 25th anniversary of the debut of Pee-wee’s Playhouse, MoCCA is proud to host a panel discussion with several animators responsible for the show’s first season.

The panelists will include:

The discussion will be moderated by Caseen Gaines, author of Inside Pee-wee’s Playhouse: The Untold, Unauthorized, and Unpredictable Story of a Pop Phenomenon. His recently released book is complete with an episode guide for the series, biographical information about the cast and crew, never-before-told anecdotes and over 200
previously unpublished photos. Signed copies of the book will be available for purchase immediately following the discussion..