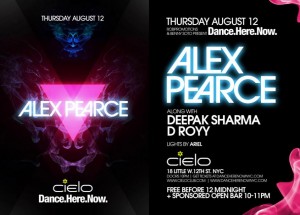 On Thurs, Aug 12th Robpromotions.com and Benny Soto present: the award wining Dance.Here.Now party with Cielo resident Alex Pearce. Come join us and celebrate the release of Alex’s latest studio mix LIVE @ CIELO 4. Alex Pearce at Cielo has been the hottest weekday party in town for the past two years. Come join us as he brings back his Thursday night debauchery to his home town of NYC. Along with a steady stream of original production, Pearce is the next new talent to look out for on the global stage…

Featuring the sound of…

Along with Deepak Sharma & D Royy

Brandishing his signature style of Tech house and Electro, Alex Pearce’s productions and live performances take aspiring audiences on a musical journey. Pearce’s live DJ sets boast a unified sound aimed at challenging the audience’s senses and giving them an undeniable urge to dance.  His arsenal of mixing, programming and track selection have earned him the chance to work alongside A list artists such as Tiesto, Sander Kleinenberg, Seb Fontaine and Behrouz  to name a few.  Pearce has emerged as an irrefutable talent on the global dance music scene now holding a residency at world famous Cielo and frequently headlining events  up and down the east coast, South America and in his native NYC, at places such as Pacha, Sullivan Room and Love.