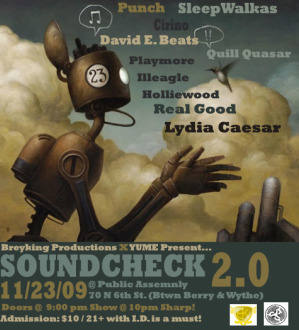 I AM PR Agency would like to announce recording artist David E Beats as one of the acts scheduled to perform at Public Assembly for the SoundCheck 2.0 on November 23, 2009. SoundCheck 2.0 is organized by BreyKing Productions and Yume.

Brey King recently shared: “By featuring artists that are on the brink of something beyond their current station, the SoundCheck attempts to be the launching pad for sounds that the rest of the world has no idea are coming. I’m trying to take the SoundCheck to another level, the level where in order to get on, you gotta come through the SoundCheck. But beyond notoriety and recognition as a brand, in the end it is what it is. It’s our culture. It’s music based, but our culture is more than music. We dance. We make music. We build. We create. Brey stresses that it’s not all about hip hop either, It’s not just coming and listening to a bunch of people rap. As I grow, my event will grow. I want to showcase all different types of artists, totally mixing up the genres to bring different people together.”_ www.in-color.net

The admission cost for this event is $10.

Make sure to come see David E Beats for a great live performance including electric guitar!