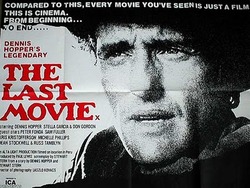 When:Wednesday, June 2, 2010
Time:9:30 pm
Where:LaunchPad
721 Franklin Ave at Park Pl
Brooklyn, NY
Cost:Free
Kings County Cinema Society will be hosting a Dennis Hopper tribute tomorrow at LaunchPad with the screening of The Last Movie. The Last Movie (1971, 108min) is a wildly audacious epic shot in Peru. “After working in a western directed by Samuel Fuller (playing himself), during which one of the lead actors (Dean Stockwell) has been killed, an American stuntman (Hopper) remains behind with a Peruvian woman. He is eventually drafted into an imaginary movie being made by the Indian villagers [and] is enlisted in a scheme to find gold in the mountains. The curious thing about this freewheeling allegory is that it is simultaneously about many things (the fakery of moviemaking, mutual exploitation, ugly Americans in the third world, Hopper as Jesus) and nothing at all.” -Jonathan Rosenbaum, Chicago Reader

The film was critically panned upon its release in ’71 and quickly pulled from theaters. Ebert called it a “wasteland of cinematic wreckage” (hilarious and brutal review here). Kings County Cinema Society is giving it a rare public screening, and if it’s intolerable, they’ll have the counter-culture classic Easy Rider (1969, 95min), Hopper’s directorial debut, as a backup. Free, popcorn will be served, BYOB.