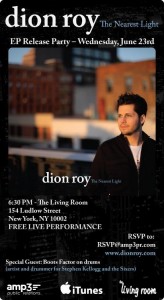 Come out to the Living Room this Wednesday to hear Dion Roy perform some tunes from his new EP Release “The Nearest Light”.  This should be a fun show! After Party to be announced later.

Dion Roy is an emerging artist on the indie music scene, fusing his electro-acoustic roots with his knack for writing an unforgettable pop/rock hook.

Born in Namibia, raised in South Africa, later raised in New Jersey and now a true New Yorker at heart, Roy has lived and breathed the downtown Lower East Side music landscape for the past 9 years. Playing as a bassist in several bands over the years, Dion Roy has graced the stage at all of the usual NYC suspects, including The Bitter End, The Red Lion, Pianos, and Arctica Bar, and opened for high-profile acts like The Donnas, Bleu, and Ben Kweller, while touring throughout the North-Eastern College circuit. – Dion Roy Official Website