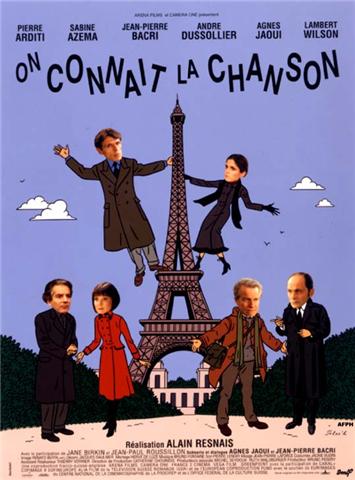 There will be music in the air this summer, as Films on the Green presents five French musicals and the film adaptation of an opera in parks throughout New York this June and July. The Films on the Green series of free screenings is jointly organized by the Cultural Services of the French Embassy and the New York City Department of Parks & Recreation for the third year running.Tonight’s Free Screening is On Connait la Chanson (Same Old Songs).

Following a misunderstanding, Camille falls in love with Marc Duveyrier, an attractive real estate agent. He in turn tries to sell an apartment to Camille’s sister Odile. Odile wants to buy this apartment, despite the silent disapproval of Claudius, her husband. He resents the reappearance after many years of absence of Nicolas, Odile’s old friend who becomes the confidant of Simon (who is an employee of Marc’s).French (with English subtitles)