Films on the Green Goes Musical:The Young Girls of Rochefort 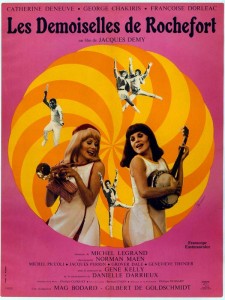 There will be music in the air this summer, as Films on the Green presents five French musicals and the film adaptation of an opera in parks throughout New York this June and July. The Films on the Green series of free screenings is jointly organized by the Cultural Services of the French Embassy and the New York City Department of Parks and Recreation for the third year running.

Screenings will take place most Fridays of June and July at sunset (around 8:30pm, seating begins at 8:15pm), and will be free of charge.

The  Young Girls of Rochefort  is a classic of French cinema starring Gene Kelly and George Chakiris (of West Side Story fame) opposite Catherine Deneuve and Françoise Dorléac. The film’s score, by Michel Legrand, was nominated for an Oscar in 1969. A dark musical comedy,  8 Women  boasts a first-rate cast of many of France’s finest female actresses, including Catherine Deneuve, Isabelle Huppert, and Emmanuelle Béart. This over-the-top parody of murder mysteries was nominated for 12 Césars in 2003.  Same Old Songs  features an interesting twist: the actors lip-synch to songs performed by the original artists, making for unusual juxtapositions (of a female character singing in a male voice, for instance). The movie won Best Film at the 1998 César Awards. One of Jean-Luc Godard’s first movies, and undoubtedly one of his most playful,  A Woman is a Woman  is a tender tribute to childishness and to American musicals—but with a distinct New Wave flair!  Love Songs , about youths coping with the loss of a loved one, also parts ways with tradition: its use of the romantic and comedic elements of the musical contrasts with its serious storyline. To cap it all off in style, the series will end with  Tosca: the Movie . Tosca is not an opera performance captured on film, but rather the opera adapted for film, starring celebrated opera singers Angela Gheorghiu and Roberto Alagna. It is a must-see for both opera aficionados and novices.