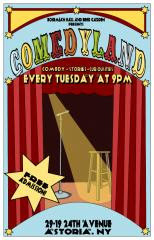 Comedyland is a weekly stand up comedy showcase hosted by Stacia Jensen and Colin Dempsey. featuring some of the best comics from around North America. Past performers include rising comics in the alt. scene as well as comics seen on Comedy Central, David Letterman, and Montreal’s Just For Laughs Festival. The most magical part: it’s FREE. Totally FREE!  Come for the comedy, stay for the kielbasa. And beer. Lots and lots of delicious beer. The Funny is waiting.