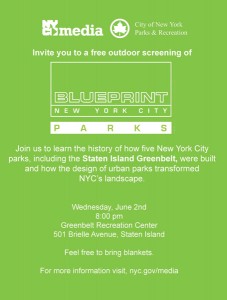 The outdoor screening will also feature It’s My Park, an NYC life series which offers overviews, activities, and behind-the-scenes glimpses of many of NYC’s most beautiful green spaces throughout the five boroughs.

In Blueprint | New York City | Parks, find out the answers to these questions:

Which park once hosted the United Nations?
Which park was the site of a turning point in the Revolutionary War?
Which park became a local attraction for residents who gathered to watch it being built?
Which park was almost turned into a highway?
Which park featured an ice skating rink that was previously a swamp?

About NYC Media
NYC Media is the official TV, radio and online network of the City of New York, informing, educating and entertaining New Yorkers about the City’s diverse people and neighborhoods, government, services, attractions and activities. NYC Media oversees several television channels, a radio station and other online assets. NYC life – Channel 25 on most systems and Channel 22 on Cablevision – explores art and culture, entertainment and lifestyle, and history and education, and features the people and places that make our City unique. Visit nyc.gov/media to learn more and to find out where to watch.