Free Screening Of The Quiet Man for St. Paddy’s Day 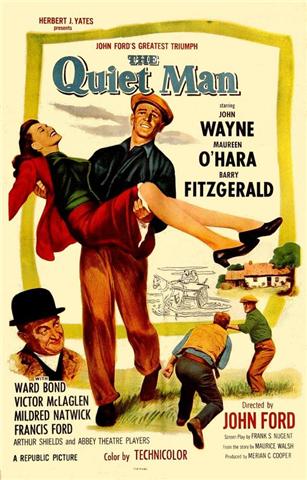 This Wednesday happens to be a holiday celebrated merrily by a billion or so drinkers around the world, and Kings County Cinema Society will honor St. Patrick with the John Ford-John Wayne back-to-Ireland classic The Quiet Man (1952, 129min).

Wayne stars as Sean Thornton, a retired American boxing champion trying to put tragedy behind him by returning to Innisfree, the bucolic Irish village of his birth. He purchases his birthplace from its owner, where he finds Mary Kate Danaher (Maureen O’Hara in one of her best roles… and at her most erotic). Thornton’s courtship of the ravishing Mary forms the core of Ford’s Oscar-winning comedy-drama, one of the legendary directors most personal films – a passion project he waited two decades to make. The Duke gives a surprisingly nuanced performance as the American fish out of water, and is matched by the rambunctious O’Hara. The Quiet Man is a glorious dose of Irish stout and a beautifully shot dream of a film. An almost Shakespearean comedy, best seen with a crowd… and with drinks. “I think I’ll go to the pub, and talk a little treason.”