Free Screening of The Social Network 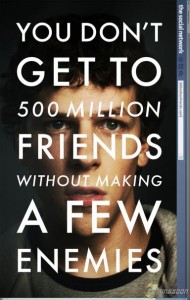 Sony’s HD Theater is having a Free Screening of The Social Network  presented in Blu-ray high definition on Saturday at 2pm. You must RSVP before Saturday. Hurry up spaces fill up quickly.

On a fall night in 2003, Harvard undergrad and computer programming genius Mark Zuckerberg (Jesse Eisenberg) began to work on a new idea. What started in his dorm room as simple blogging and programming soon became a global social network and a revolution in communication. A mere six years and 500 million friends later, Mark Zuckerberg is the youngest billionaire in history.
Directed by David Fincher. Running time: 120 mins.