Free Tickets To Get Him to The Greek 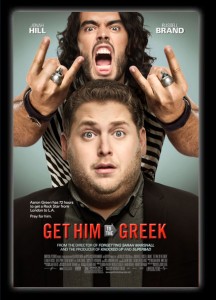 Get tickets to the New York Advance Screening of Get Him To The Greek. Click here to RSVP for your Tickets.

An ambitious young record company executive attempts to transport an unpredictable rock star to L.A.’s Greek Theatre in time for his hotly anticipated comeback performance in this spin-off of the comedy hit Forgetting Sarah Marshall. Aaron Green (Jonah Hill) has just landed his dream job in the record industry, and he’s eager to prove his worth. His first assignment: travel to London and escort British rock god Aldous Snow (Russell Brand) to the show that will re-ignite his career. Before he departs, Aaron is warned by his boss Sergio Roma (Sean Combs) to never let Aldous out of his sight, and never underestimate his capacity for mayhem. Immensely talented yet deeply tortured, Aldous hit the bottle hard after his popularity began to wane and his girl walked out on him. Aldous is locked in the midst of an existential crisis, and rues the thought of being accompanied across the pond by an insincere sycophant. Though it seems like sex is the only thing Aldous ever thinks about, his thoughts turn to romance when he discovers that gorgeous model/pop singer Jackie Q (Rose Byrne) will be in Los Angeles at the time of his concert, too. Jackie Q is the love of Aldous’ life, and he’ll do anything and everything to win her heart. With the concert fast approaching and Aaron’s fledgling career on the line, the race is on to get Aldous to the Greek, and ensure the big show goes off without a hitch. ~ Jason Buchanan, All Movie Guide