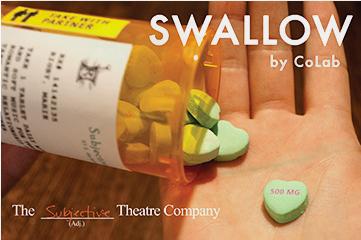 The Subjective Theater Company (STC) would like to invite its audience and all sufferers of HRRD* (Hypoactive Romantic Relationship Disorder) to be wooed by its fourth and final production of the 2009/2010 season and CoLab creation, SWALLOW.

Can love come in a pill? Is decreased romantic satisfaction a chemical imbalance that can be solved with a prescription, or is it a personal failing? SWALLOW explores how modern relationships are both hindered and influenced by society’s idea of love and courtship when a pharmaceutical company invents a love drug called Amorex and assembles a panel of experts (a.k.a) “love gurus” to administer the test amongst unassuming couples.