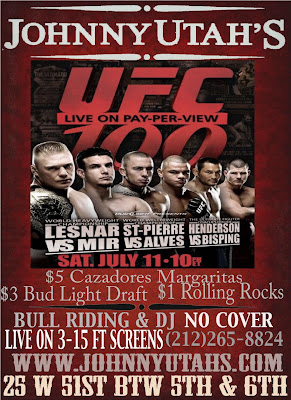 You could hit that UFC 100 viewing event at Radio City Music Hall or you could walk a few more blocks and watch it FOR FREE at Johnny Utah’s since they are showing it with NO COVER CHARGE. And I’m pretty sure you are not getting the kind of food and drinks at the concert hall like you will at Johnny Utah’s.

UFC light heavyweight standout Matt Hamill will also be stopping by a little later in the evening to grab some grub, sign autographs and take pictures with the fans. Did I mention there was NO cover charge?

Who knows, you may even catch a glimpse of Nostradumbass riding the mechanical bull. -MMA Mania