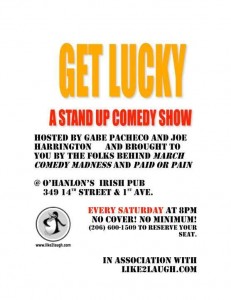 You are invited to Get Lucky, a new stand-up comedy showcase at O’hanlon’s. This saturday at 8pm. No cover! No minimun! Just great drink specials, and pro comics. Show up early as seating is limited. Make a reservation at (206) 600-1509 8pm Sharp!

This week’s line -up includes: