Ghandi, is That You? Free Comedy Show 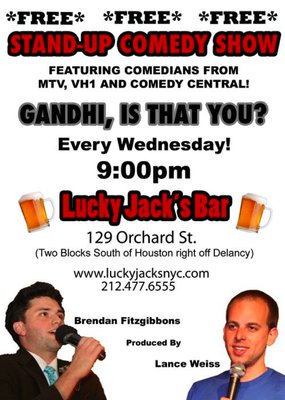 Great new free stand-up comedy show on Wednesday March 3rd, at 9:00 pm at Lucky Jacks in the Lower East Side!!! Brand new comedy show produced by Brendan Fitzgibbons (The Onion, McSweeney’s) and Lance Weiss (Carolines on Broadway) with comedians from David Letterman, Vh1, MTV, The Onion, and Comedy Central. It’s a free show! Come on out and laugh your faces off!