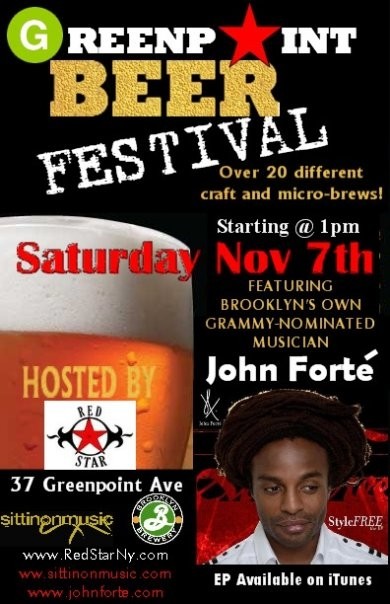 Red Star Bar, Brooklyns premiere sports bar will be hosting the first annual Greenpoint Beer Festival set to kick-off at 1:00pm on November 7, 2009. Featuring over 20 craft and microbrews attendees will enjoy a variety of specialty brews from over 15 local, national, and international breweries including Blue Point, Sierra, Smuttynose, Lagunitas, Brooklyns own Kelso and Sixpoint, Brooklyn Brewerys brewmaster reserve, and for the first time in the United States, Latiss Steenbrugge Tripel.  Attendees can also sample up to six of these unique and great beers for only $20!  Beerfest will also feature live music all day with a special performance by Brooklyns own Grammy-nominated singer, songwriter and producer, John Forté.  Forté will perform powerful songs from his critically acclaimed new StyleFREE EP available on iTunes now! SittinOnMusic Studios Evan Watson, Craig Mitchell, Tamika Jones, Fatso, and Kelly Jo will round out the bill.  With beer educators on site, tasty fare from Executive Chef John Manzos kitchen, and amazing live music all day, Beerfest will be an event that any beer enthusiast, music buff and sports fan will enjoy and be talking about for a long time!
Must be 21+ to attend.