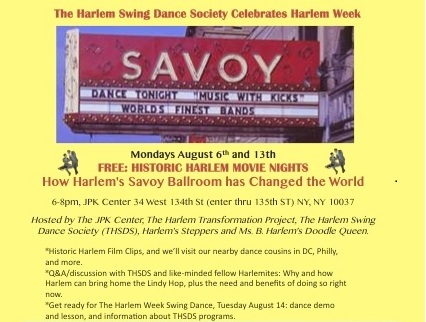 Join The Harlem Swing Dance Society as they present Harlem Week Movie Nights. This week they will be presenting Part 1: Harlem’s Historic Savoy Ballroom Revisited – and the Dance it made World Famous! Why is Harlem’s signature cultural dance of the Lindy Hop relative and important to Harlem now, 80 plus years later? View historic and classic film clips of Harlem in its heyday when Swing as King: See the Innovators of this cultural dance that took the world by storm! Followed by a Q&A discussion and a demonstration. Information for The Harlem Week Swing Dance 2012 will be distributed, and info for future dance classes.