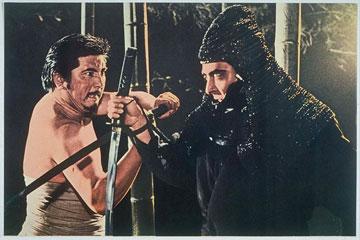 The Asia Society and Museum is hosting a month long series of Japanese movies from the sixties.
Tonight’s selection will be the feature film The Fort of Death.

The decade of the ’60s produced a wide array and high quantity of films that made it the golden age of Japanese cinema. Politically radical New Wave films, formally vigorous art films, and mainstream genre films were produced side-by-side contributing to the vibrancy of the industry. This series showcases a sampling of films representative of this period. These diverging voices reflect acute attitudes toward a changing Japan, a sense of exploration, with hints of tradition. (All films in Japanese with English subtitles.)
Peasants in a village hire a bounty hunter to rebel against a shogun who exploits them for money in order to remodel an Edo castle. The bounty hunter summons his fellow fighters to join the fight. What ensues is an epic battle involving samurai, ninjas, powerful guns and cannons. Growing up in a family that ran a horse breeding business, director Kudo has proved particularly adept at choreographing action sequences, making this Japanese version of a B-Western especially enthralling. (Toei Co., Ltd.)

“[Kudo is] an extraordinary stylist…To call him a skilled action director is to understate the power of his set-pieces.”—Henry Sheehan