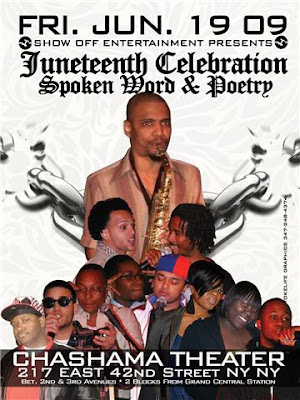 Hosted by Mr. Ace. Juneteenth is the name given by Africans in America to the date of June 19th. This day is significant as it is known as the anniversary of the June 19, 1865 announcing of the end of overt slavery in Galveston Texas by Union forces. Over two years after the January 1, 1863 effective date of the abolition of overt slavery via the Emancipation Proclamation.

Therefore June 19 is observed by Africans as the official date of the abolition of overt slavery and not the issue date of September 22, 1862 nor January 1, 1863 the legally effective date.

Now, we clearly know that the legal abolition of overt chattel slavery changed little during that time. The gains that that were made were not granted, the ancestors fought for them. Also we still are struggling with the task to free the minds of Africans and all people worldwide.

On June 19 2009 Show off Entertainment is putting on an event of poetry and music to commemorate this date.