KCCS Presents Local shorts, trailers & A Free Screening of Down By Law 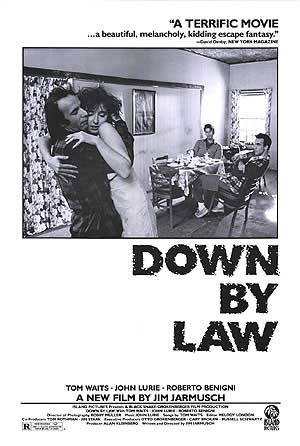 Christian Carroll, a Brooklyn-based writer-director-cinematographer-actor, will present a music video,”Strange Position” by Adam Harpham, and the debut of the official trailer to his upcoming “black comedy sci-fi” feature Suicide or Lulu and Me in a World Made For Two. Elliot Eustis, a local actor, director and videographer, will present two recent projects: a beautiful experimental video project set to the song “Redlights” by Salem, and the short clip “Late Afternoon in the Park.”

Down By Law (1986, 107min) is arguably the finest film by New York post-punk auteur Jim Jarmusch: an existential, hilarious, bone-dry comedy/elegy, in which three very different convicts rely on each other to bust out of prison in the Louisiana bayou. Starring Tom Waits, John Lurie, and Roberto Benigni as an out-of-work DJ, a low-rent pimp and a cheerfully clueless Italian tourist, respectively.  With gorgeous silvery black-and-white photography of NOLA and the bayou by Robby Muller, and Jarmusch’s signature deadpan touch, Down By Law stands as a true original and one of the best American indies of the ’80s. original trailer