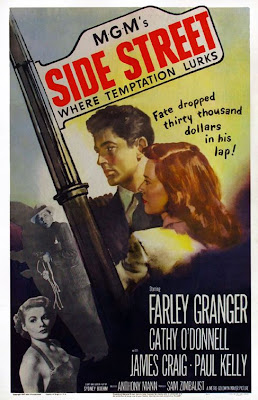 –Coney Island (1917, 25min) — Buster Keaton and Fatty Arbuckle star in this short silent slapstick comedy shot in and around the famous Brooklyn Amusement park. Starts at 7:30.

–Side Street (1949, 83min) — . Farley Granger steals money from the mob to help his ailing wife, only to find himself hunted by both cops and criminals in director Anthony Mann’s visually ravishing, thrilling film noir partly shot on the streets of NYC. The climactic car chase thru the concrete canyons of manhattan influenced both BULLITT and THE FRENCH CONNECTION. Starts at 8pm sharp.

Live hip hop from Sun Rise Above at 9:30. Stick around.
Take the Q to Cortelyou