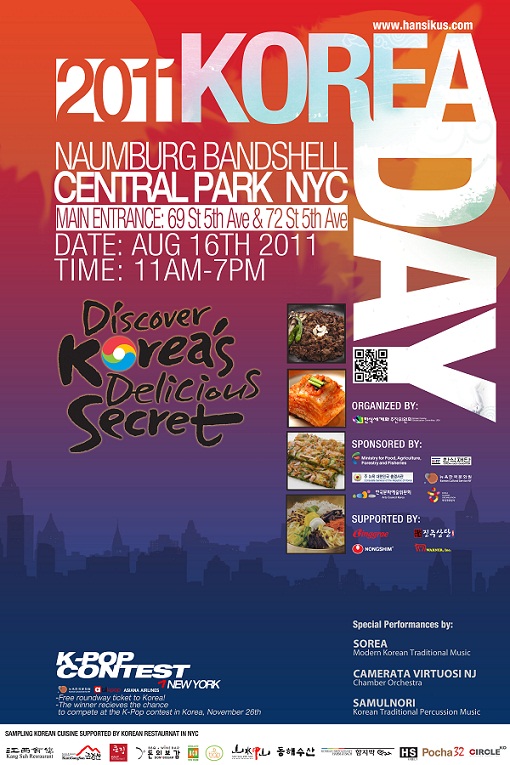 If you are anything like me who absolutely loves everything that is Korean Culture you can’t miss Korea Day at the Park.

On Tuesday, August 16th from 11a.m. to 7p.m., Korean Cuisine Globalization Committee (President: Ja Bun Kwak) is presenting The 2nd Annual Korea Day at Naumburg Bandshell located in Central Park (located south of Bethesda Terrace between 66th and 72nd Streets). Korea Day is a major New York event portraying all aspects of Korean culture from food to music. The day begins with a welcoming ceremony at 11:30 where Sorea, a Korean band that plays modern Korean traditional music will take the stage.

Throughout the day there will also be a Korean Food Exhibition which will give those who attend a chance to taste Korean food specialties such as Bulgogi & Ssam (beef in a soy sauce marinade), Jeyuk Gui & Ssam (pork in a red pepper paste marinade), Japchae (stir fried potato noodles with vegetables,) Tteokbokki (rice cake in red pepper paste), Bibimbap (rice with vegetables and beef), Jeon (Korean pancake), and of course the staple Korean condiment Kimchi.

In addition, at the Korean Food Exhibition there will be a chance to experience ‘dduk-mea chi-gi’ (the process of making dduk, Korean rice cake) where the rice cake is beaten up with a giant wooden hammer to make it more adhesive, ‘Making Kimchi,’ and ‘Giant bi-bim bob’ (bi-bim bob will be produced in a giant bowl with all the ingredients, and people will get to mix it and taste it). There will also be booths set up to display traditional Korean sauces and condiments, providing basic knowledge of how they are used. The Korean Culture Exhibition is also planning to set up a booth for people to try on Hanbok (Korean traditional clothes).

During the day, the Chamber Orchestra Camerata Virtuosi NJ will also be playing classical music, and Sorea will take the stage once more for the closing ceremony.

Perhaps most exciting will be the first ever K-POP Contest hosted by Korean Cultural Service New York and allkpop.com, specially sponsored by Asiana Airlines. New Yorkers are invited to participate and compete in a display of singing and dancing. 8 teams will perform and compete live at the Central Park outdoor stage. The first place team will win a free round-trip ticket to Korea and be given the chance to compete in the K-POP contest in Korea on November 26th.

This year’s Korea Day will have a fantastic combination of traditional and pop Korean culture and will give New York residents and visitors an extraordinary opportunity to be at one with Korean food and culture.