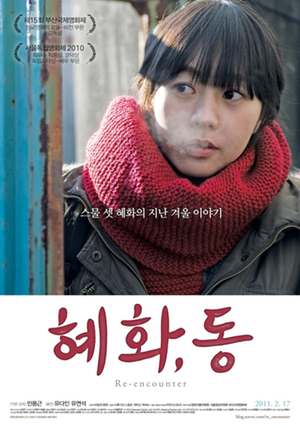 The Korean Culture Society continues its Free Korean Movie Night with a Free Screening of the US Premiere of Re-Encounter.

A film festival favorite featuring two powerful lead performances from Yoo Da-In and Yoo Yun-Suk, RE-ENCOUNTER won a fistful of awards around the world and became a major indie word-of-mouth success when it was released theatrically in Korea. Hyehwa is a veternarian’s assistant living a quiet life when suddenly her high school sweetheart reappears one day and tells her that the child they thought died when he got her pregnant at 18 is still alive. Lyrical and intimate, it’s a movie that sees two people tear themselves up in quiet desperation. -Korean Cullture Society