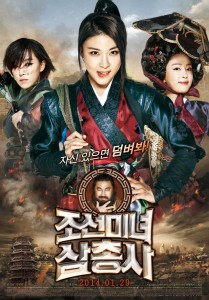 The Korean Culture Society continues its Free Korean Movie Night with a special free US premiere screening of The Huntresses.

As a child, Jin-ok witnesses the murder of her father and narrowly escapes death. Ferried away by a legendary fighter, she and two other girls begin training in martial arts and become THE HUNTRESSES! Ten years later, the trio of young women have become the Joseon dynasty’s top bounty hunters. Commissioned by the king, they set out on a secret mission to search for the legendary stauroscope – an object that, if it were to land in the hands of evil, would grant absolute power to the holder and overturn the royal family! If you’re craving excitement, you can’t miss this hilarious, heartwarming action-fest that’s epically fun!