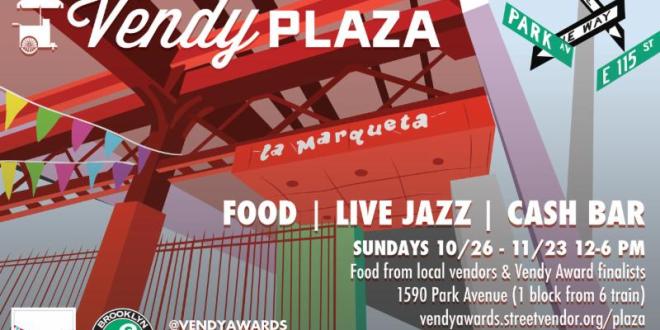 Come to one of New York City’s oldest marketplaces for Vendy Plaza at La Marqueta Retoña every Sunday from 12-6 PM until the end of November. The Vendy Awards and the Office of the Speaker Melissa Mark-Vivierito have partnered to bring Vendy winners and favorites and local vendors together to celebrate the role of the marketplace in New York City’s history. Live jazz fusion will be provided by Trombeatz and there will be a cash bar featuring plenty of Brooklyn Brewery beer to take along as you shop. Stop by and enjoy a uniquely New York day out.

BACK BY POPULAR DEMAND: FREE BROOKLYN BREWERY BEER ONE HOUR SPECIAL FROM 3-5PM*! TIP $1 AND GET A VENDY AWARDS KOOZIE TO TAKE HOME WITH YOU!

*while supplies last, must be 21+ to drink. Vendy Awards reserves the right to refuse service

The Vendy Plaza will feature a rotating list of vendors, including: