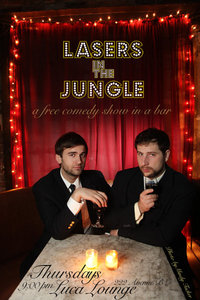 If you haven’t checked out Lasers in the Jungle Free Comedy Show at Luca Lounge, then you’ve been missing out on the best new free weekly comedy show. Hosted by local favorites Sean Crespo (Drink at Work) and Dan Wilbur (Better Book Titles) and produced by Carol Hartsell (Drink at Work, The ECNY Awards), Lasers showcases the best up-and-coming comedians in the city as well as surprise regular drop-ins. Now Luca Lounge is offering 2-for-1 drinks on Thursdays. The best comedy + great drink specials = there’s no reason not to be a Laser!