Love is The Message 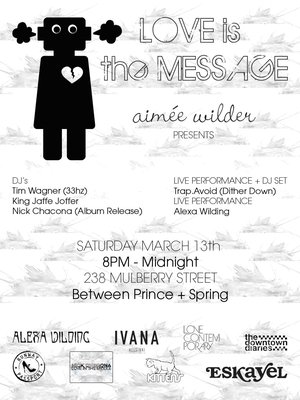 Join Aimee Wilder as she presents Love Is The Message at the Ivana Helsinki Pop-Up Shop in Soho. The event will feature complimentary cocktails, window displays by Aimee and Shanan Campanaro of Eskayel, DJ sets by Tim Wagner (33hz), King Jaffe Joffe, and Nick Chacona (who will be releasing his new album – Love In The Middle), as well as a live performances by Trap.Avoid and Alexa Wilding.