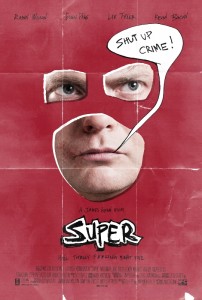 Join director James Gunn as he discusses his new comedy, “Super.” The story follows a man (Rainn Wilson) who decides to become a superhero after a series of unfortunate events, including his wife (Liv Tyler) leaving him, being literally touched by the finger of God in a dream, and seeing a morally preachy superhero named the Holy Avenger (Nathan Fillion) on TV.