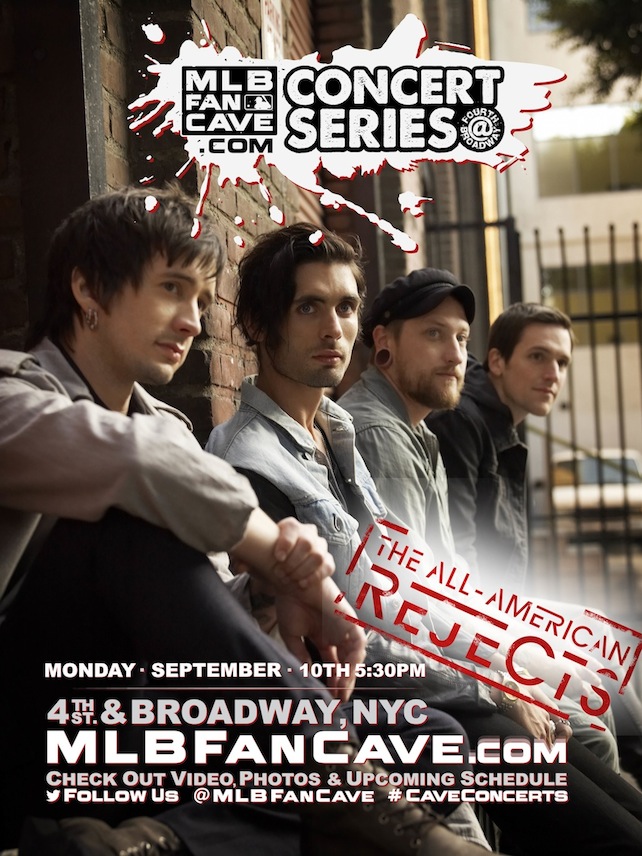 The performance is open to the public on a first-come, first-serve basis and fans are encouraged to come down to the MLB Fan Cave (corner of 4th and Broadway) for the chance to see the set. Please note that space is limited.

About The All American Rejects:

It was December 2009 and The All-American Rejects were in celebration mode. The band — which lead singer, bassist, and lyricist Tyson Ritter and his long-time friend guitarist Nick Wheeler formed as teenagers in Stillwater, Oklahoma, before being joined by guitarist Mike Kennerty and drummerChris Gaylor in 2002 — had just wrapped up touring behind their third album, 2008’s When The World Comes Down. The Rejects played to ecstatic audiences across the globe, thanks to scoring their first international hit, “Gives You Hell,” which also spent four weeks at No. 1 at Top 40 radio, became the No. 1 most-played song of 2009 at the format, and went on to sell four million copies in the U.S. alone. After finishing a tour that capped 10 years in the music industry — during which time the Rejects also released a self-titled platinum debut in 2003 and the double-platinum Move Along in 2005, as well as a string of well-received singles.