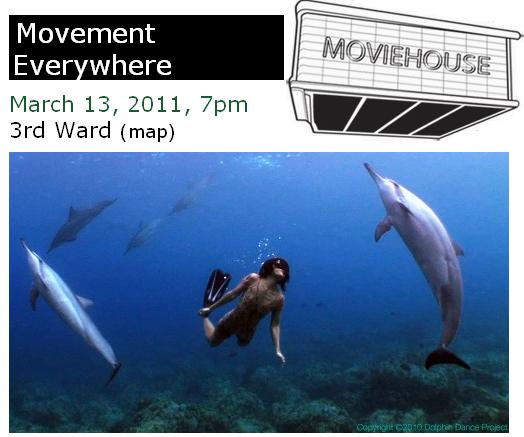 This week Moviehouse wondrous dance films from epic locations. From Japan to Europe and even under the sea watch as performers deliver remarkable movement stories in locales quite unfamiliar to dance. With new films from Salts, Sharp Elbow, Zena Bibler and little dances everywhere, Chisa Hidaka, and Lauren Kritzer.

Come at 7pm and start the night off with some exotic snacks by Brooklyn Hummus. On the menu: hummus as you know it (creamy and served with pita), warm spiced chickpeas, and … the crown jewel …Msabaha, warm chickpeas in a special, spicy tahini sauce. A little bit somewhere else in the 3rd Ward lobby.

The two films are part of the installation project BB123 created via site specific filming in Iceland and Denmark.The project was inspired by the close connection the two Nordic nations have. With BB123 the filmmakers draw a poetic image of nature and human relations. Beach (strönd/strand) was individually filmed in Iceland and Denmark. The dancers are edited together on the screen to one choreography. Forest (skógur/skov), is a Danish Solo in a forest North of Copenhagen.

Together by Chisa Hidaka

Recognized as Best Experimental Film at its world premiere at the Big Apple Film Festival, ʻTogether: Dancing with Spinner Dolphinsʼ is the debut ﬁlm of the Dolphin Dance Project. It portrays Chisa and wild Spinner Dolphins forging a tender relationship through the graceful language of dance in the deep blue waters of the Paciﬁc Ocean. While directing and performing in the ﬁlm, Chisa used principles of dance improvisation to work with dolphins that are completely wild, participating voluntarily without feeding or any other coercion. To watch ʻTogetherʼ is to see the unfolding of a rare artistic collaboration between a human and completely wild animals. ʻTogetherʼ is a true innovation in dance and inter-species communication. It is also a poetic portrayal of the simple beauty of a human in harmony with Nature.

Yellow is a video by Tori Sparks in collaboration with video artist Jessye McDowell and orchestrated to the music of the New York-based band Antler. Yellow is the third installation of Sparks’ Trilogy of Two. Trilogy of Two is a series of movement-based videos featuring independent bands Towers of Hanoi, Hot Snakes and Antler. The underlying theme of each installation explores “twinning”, the shared identity of two identical characters who are experiencing the pitfalls of seeking individual sovereignty.

Dune(s) dance on a blustery day in Wellfleet, Massachusetts. Choreographed, created, danced, and filmed on the spot. May 2010.

Overboard was shot in Bimini, Bahamas by Lauren Kritzer using only a humble FlipCam. The experimental short, void of any dialogue, reflects on a deeply personal experience of the filmmaker. With strong sound design and dramatic imagery, Lauren hopes to bring the viewer on an emotional journey.