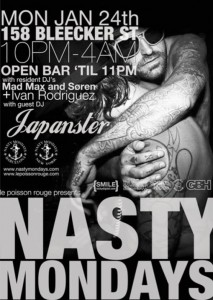 Nasty Mondays DJs Max and Sören are returning to New York and again teaming up with Nasty Mondays DJ Ivan Rodriguez, keeping their tattoo-laden dirty rock ‘n roll parties going in New York. This month they are bringing in special guest DJ Japanster (David Abitbol). Nasty Mondays will be kicking off 2011 with their biggest and best NYC parties yet. As the 6 Year Anniversary of Nasty Mondays Barcelona approaches in Spain (with The Sounds) they’ll be bringing in bigger and better guest DJs in NYC leading into their yet to be announced, killer One Year Anniversary party in April! Nasty Mondays NYC has grown fast in less than year, becoming the party to catch every month with special guests stopping by every month, including Punches and Michael T (Motherfxxxer). Don’t miss their eclectic blend of 50s rockabilly, 80s new wave, remixes, hair metal and more on Mon. Jan 24th at The Gallery at LPR
Open Bar 10pm-11pm.