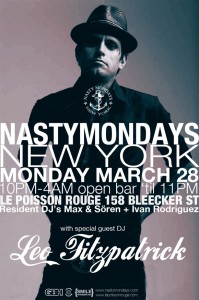 Nasty Mondays DJs Max and Sören and DJ Ivan Rodriguez return to New York for their last party in the Gallery at LPR before their one year anniversary at LPR. This month they are bringing along special guest DJ Leo Fitzpatrick – an actor best known for his role in Larry Clark’s Kids – stopping by from his weekly residency at Lit. The months leading up to the big one-year anniversary have seen some great guests like Punches, Michael T, Japanster, and more. The guests are going to keep dropping in (including some surprises) as the party gears up for the one year anniversary blow out, which will feature their always eccentric blend of 50s rockabilly, 80s new wave, remixes, hair metal and everything in between. Plus there will be an Open Bar from 10pm-11pm.When you arrive, tell the doorperson you are on the GBH guest list.