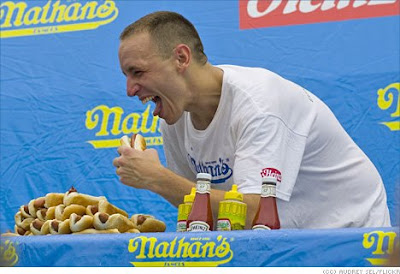 Come see if Joey Chestnut can keep the title! It’s not summer without the hot dog eating contest.

The Nathan’s Fourth of July Hot Dog Eating Contest. Each Fourth of July a group of 20 steely-eyed individuals line up behind a 30-foot table at Nathan’s flagship restaurant on Surf Avenue in Coney Island to begin the world hot dog eating championship. At 12 Noon, crushed by fans and media, the competitors begin the historic 12-minute contest.