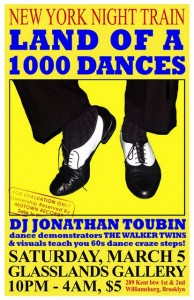 Did you wanna learn how to PONY like Bonie Maronie? FUNKY BROADWAY? TIGHTEN UP? Well its time to HITCH HIKE across the floor, prove that nobody can BOOGALOO like you do, pass the BUG and kill that ROACH!   The legendary 45 DJ/conceptualist behind the Soul Clap and Dance-Off, the Happening, and a number of other world famous parties, New York Night Train’s MR. JONATHAN TOUBIN is unveiling the second test run of what he predicts will be his biggest and best party yet, the LAND OF 1000 DANCES. But before he takes this to bigger venues, he’s doing one last test-run at his home away from home The Glasslands.  While the music and dancing will relentlessly flow throughout the night like any of New York Night Train’s mightiest get-downs, every 45 turned will relate to a specific 1960s dance craze, demonstrators Georgia Walker and Sarah King (and special guests) will show you how each dance is done, and the visuals will let you know the name of the step and more. The first go at this was, by all accounts, a very wild and woolly time for a capacity crowd – so expect even more and better tonight! Now lemme hear you say, “Na, Na Na Na Na, Na Na Na Na, Na Na Na Na Na Na, Na Na Na Na!”