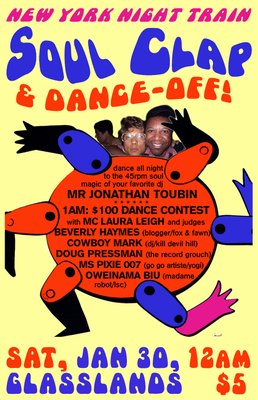 New York Night Train’s most popular party (and contest), the Soul Clap and Dance-Off, which last year broke out of Brooklyn to ping-pong back and forth all over the globe – from Portland, Oregon to Portland, Maine – from Mexico City to Tel Aviv, makes it’s 2010 New York debut at its Glassland’s Gallery home Saturday. As always, this month’s Soul Clap will feature all-night dancing to the exquisitely dynamic 45rpm ’60s soul magic of New York Night Train soul proprietor DJ MR JONATHAN TOUBIN – plus a 1AM Dance-Off for a $100 grand prize presided over by the lovely MC Laura Leigh.

This week’s contest will be presided over by a distinguished panel of judges consisting of the following pillars of the local community:

– Beverly, co-proprietor of Lower East Sidefashion boutique Fox and Fawn and blogger
– Cowboy Mark, renowned NYC DJ and owner of Greenpoint vintage/antique/genral store Kill Devil Hill
– Doug Pressman, who not only runs Williamsburg’s latest all-vinyl record mecca, The Record Grouch (he IS the record grouch – so watch out contestants!)
– Ms. Pixie 007, the fine go go go dancer behind many a great New York parties and, by day, the yoga instructor to the stars
– Oweinama Biu, who not only DJs all over town but is also a very prolific rock and roll musician (Madame Robot and the Lust Brigade, Les Sans Culottes, etc.)

Doors and dancing start at MIDNIGHT. Feel the feel-good party that keeps on giving long after the holiday season… And don’t forget to hear Mr. Toubin play primarily non-soul music from around 4:30 to 8am at a not-so-secret Williamsburg afterhours…