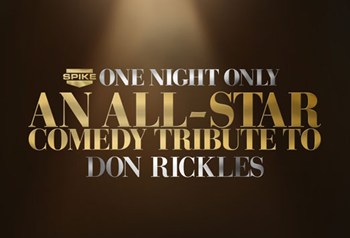 One Night Only: An All-Star Comedy Tribute to Don Rickles

The biggest superstars in comedy will come together on Spike TV to celebrate the legendary career of one of their most beloved icons – Don Rickles. “One Night Only: An All-Star Comedy Tribute to Don Rickles” will feature luminaries from the world of comedy, television and the silver screen including David Letterman, Jerry Seinfeld, Jon Stewart, Robert De Niro, Martin Scorsese, Tracy Morgan, Jimmy Kimmel, John Stamos, Bob Newhart, Regis Philbin, Ray Romano, Brad Garrett and many more.

1iota wants fans to be apart of this momentous night by offering free tickets to be seat fillers. If you want to join in this once in a lifetime experience just click here for tickets on May 6th.

“One Night Only: An All-Star Comedy Tribute to Don Rickles” will include stand-up performances; short films; pre-taped tributes and personal stories as told by Rickles’ closest friends, co-stars and comedians he has influenced. The evening will culminate with Rickles getting the chance to address his friends and colleagues in attendance in his own words and his own inimitable style.