Party For a Cause Tonight @ The Mean Fiddler 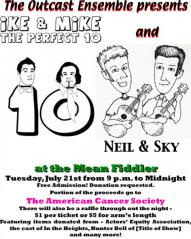 On Tuesday, July 21, come help raise some green for their next production coming up in August. While you’re there drinking and enjoying the LIVE MUSIC a portion of your donations and contributions will be going to help the American Cancer Society.

Featuring the stylings of Ike & Mike – The Perfect 10 and Neil & Sky.

They have beer pong tables, so they will be having a beer pong tournament as well!! $20 a team and the winner gets something cool (I’ll let you know what it is when I get it). $20 may seem like a lot, but we’re playing tournament style, so if you keep winning, you’re getting your money’s worth!

They will also be having a raffle throughout the evening of anything and everything we can get our hands on to give away.
Items we have so far include:
Two tickets to Shrek the Musical!!
AEA T-shirt and hat from AEA
$15 iTunes Gift Card
Signed poster from the cast of In the Heights
Signed something from Hunter Bell of [title of show]Signed something from the cast of West Side Story
and more to come!

Fun starts at 9 p.m. and they are rolling on til midnight.

Suggested donation (tax-deductable, if you need a receipt) and $1 per ticket or $5 for arm’s length.

If you can’t make it but would still like to make a donation to ACS and Outcast, you can do so here.