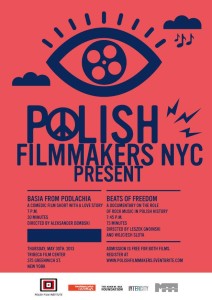 Want a free rock history lesson and a little bit of romance? Join Polish Filmmakers NYC for a free screening of the documentary the “Beats of Freedom” and the comedy “Basia from Podlachia”.

“Basia from Podlachia” is a bitter comedy of manners with a bit of a love story. Dutchman Evert is fascinated by the romantic image of Polish women created by the Internet. Therefore, he decides to find a wife in Poland. One way to find the right candidate is… having a casting. Dembski shows in a satirical way differences in perceiving the contemporary world by people from Eastern and Western Europe.

“Beats of Freedom” depicts the role of rock-n-roll in Poland’s march toward independence.  It includes footage of the Rolling Stones mesmerizing Polish youth hungry for new ways of expression during the Communist era.